A lot of projects I’ve worked on lately have involved an initial big Hadoop job that produces a few gigabytes of data, followed by some exploratory analysis to look for patterns. In the past I would have sampled the data before loading it into a Ruby or Clojure REPL, but increasingly I’ve started to use nfu for these last-mile transformation tasks:

nfu is a command-line Perl tool that builds shell pipelines to transform text data. Conceptually, it does two things:

Before diving into how nfu works, here are a couple of use cases that illustrate what it does at a high level.

As words get longer, do they tend to contain more “e”s? Probably, but let’s find out empirically by looking at all English words. Specifically, we’ll generate a plot whose X axis is cumulative length and whose Y axis is cumulative “e” count. Using standard UNIX tools: 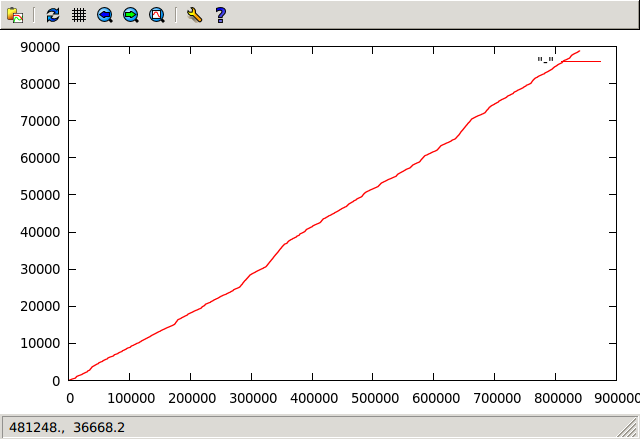 We can easily change this command to get a scatter plot. To see densities better, let’s add a bit of randomness to each data point: 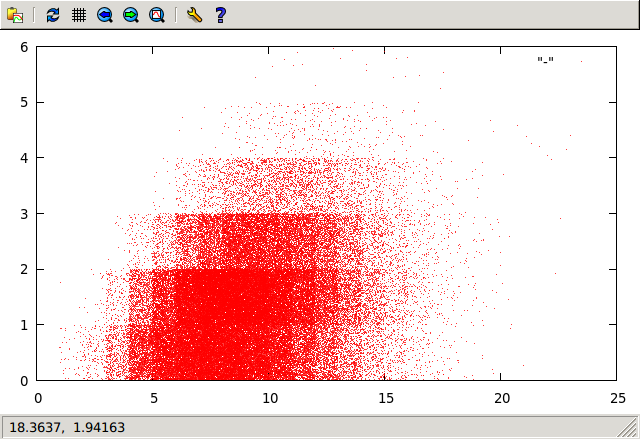 The first three lines are identical, so we can generate an intermediate file. nfu transparently loads compressed data, so let’s gzip the file to save some space:

Suppose you’ve got two files, one a TSV of user-id, tweet-json and the other a TSV of user-id, user-json. You’d like to measure the differences between tweets of people with many vs few followers by building a list of most-used words faceted by log(followers). Using standard tools (including the indispensable jq) you might do this:

Of course, an easier way to do most of this would be to use SQLite or local map/reduce, but these introduce their own overhead, particularly when interoperating with other tools. Here’s how to do all of the above using nfu:

nfu is all about tab-delimited text data. It does a number of things to make this data easier to work with; for example:

Now let’s do some basic word counting. We can get a word list by using nfu’s -m operator, which takes a snippet of Perl code and executes it once for each line. Then we sort (-g, or –group), count-distinct (-c), and reverse-numeric-sort (-O, or –rorder) to get a histogram descending by frequency:

%0 is shorthand for $_[0], which is how you access the first element of Perl’s function-arguments (@_) variable. Any Perl code you give to nfu will be run inside a subroutine, and the arguments are usually tab-separated field values.

Commands you issue to nfu are chained together using shell pipes. This means that the following are equivalent:

nfu uses a number of shorthands whose semantics may become confusing. To see what’s going on, you can use its documentation options:

You can also run nfu with no arguments to see a usage summary.

The -F operator resplits lines by the regexp you provide. So to parse /etc/passwd, for example, you’d say nfu -F : /etc/passwd ….

-M is a variant of -m that runs a pool of parallel subprocesses (by default 16). This doesn’t preserve row ordering, but can be useful if you’re doing something latency-bound like fetching web documents:

In this example, Perl’s qx() operator could easily produce a string containing newlines; in fact most shell commands are written this way. Because of this, nfu’s row() function strips the newlines from each of its input strings. This guarantees that row() will produce exactly one line of output.

Each of these operations can be applied to a specified set of columns. For example:

Some of these commands take an optional argument; for example, you can get a windowed average if you specify a second argument to -a:

Note: all plotting requires that gnuplot be in your $PATH.

You can use nfu –expand-gnuplot ‘%l’, for example, to see how nfu is transforming your gnuplot options. (There’s also a list of these shorthands in nfu’s usage documentation.)

If you’re doing something with a large amount of data, it’s sometimes hard to know whether it’s worth hitting ^C and optimizing stuff. To help with this, nfu has a –verbose (-v) option that activates throughput metrics for each operation in the pipeline. For example:

nfu provides two functions, jd (or json_decode) and je/json_encode, that are available within any code you write:

This code uses another shorthand, .locality, which expands to a Perl hash dereference ->{“locality”}. There isn’t a similar shorthand for arrays, which means you need to explicitly dereference those:

You can setup a multiplot by creating multiple columns of data. gnuplot then lets you refer to these with its using N construct, which nfu lets you write as %uN:

The semicolon notation is something nfu requires. It works this way because internally nfu scripts gnuplot like this:

nfu provides an aggregation operator for sorted data. This groups adjacent rows by their first column and hands you a series of array references, one for each column’s values within that group. For example, here’s word-frequency again, this time using -A:

A couple of things are happening here. First, the current group key is stored in $_; this allows you to avoid the more cumbersome (but equivalent) ${%0}[0]. Second, %1 is now an array reference containing the second field of all grouped rows. sum is provided by nfu and does what you’d expect.

In addition to map/reduce functions, nfu also gives you –partition, which you can use to send groups of records to different files. For example:

–partition will keep up to 256 subprocesses running; if you have more groups than that, it will close and reopen pipes as necessary, which will cause your subprocesses to be restarted. (For this reason, cat > … isn’t a great subprocess; cat >> … is better.)

But sometimes you’ll need more definitions to write application-specific code. For this nfu gives you two options, –use and –run:

Any definitions will be available inside -m, -A, and other code-evaluating operators.

A common case where you’d use –run is to precompute some kind of data structure before using it within a row function. For example, to count up all words that never appear at the beginning of a line:

Notice that we’re package-scoping %::seen. This is required because while row functions reside in the same package as –run and –use code, they’re in a different lexical scope. This means that any my or our variables are invisible and will trigger compile-time errors if you try to refer to them from other compiled code.

Gzipped data is uncompressed automatically by an abstraction that nfu calls a pseudofile. In addition to uncompressing things, several other pseudofile forms are recognized:

nfu supports pseudofiles everywhere it expects a filename, including in read_file and read_lines.

nfu gives you several commands that let you gather data from other sources. For example:

Here’s what these things do:

Sometimes you’ll want to use nfu itself as a shell command, but this can become difficult due to nested quotation. To get around this, nfu provides the –quote operator, which generates a properly quoted command line:

Keyed joins
This works on sorted data, and behaves like SQL’s JOIN construct. Under the hood, nfu takes care of the sorting and the voodoo associated with getting sort and join to work together, so you can write something simple like this:

We could sidestep all nonexistent words by using -i0 for an inner join instead. This drops all rows with no corresponding entry in the lookup table.

Go forth and conquer

nfu is an actively-maintained project we use in production, so bug reports and feature requests are both welcome. If you read this far and find this kind of thing interesting, you should consider working at Factual!